To drive safely in Florida you must understand what the different lines on the road mean. Their Color and whether they are solid or broken tell you how to drive in that situation and what you can and cannot do. A Double Yellow Line for example tells you that you cannot pass.

Lines, symbols and words are often painted on a roadway to help direct drivers and control traffic flow. You must know what the different lines and colors mean and obey them as you would traffic signs or signals.

White and yellow lines are used along pavement edges and between lanes to keep vehicles in line. These lines may be solid or broken (long dashes), single or double.

A broken yellow line separates lanes of traffic moving in opposite directions. Stay to the right of the line, unless you are passing a vehicle in front of you. When passing, you may cross this line temporarily when it is safe to do so.

A solid yellow line to the right of a broken yellow center line means passing or crossing is prohibited in that lane, except when turning left. If the broken line is closer to you, you can cross the broken line only to pass another vehicle and only when it is safe to do so.

Double solid yellow lines prohibit vehicles moving in either direction from crossing the lines. You may not cross these lines unless turning left when it is safe to do so.

A broken white line separates two lanes traveling in the same direction. Once you have signaled, and if it is safe to do so, you may cross this line when changing lanes.

Solid white lines are used for turn lanes and to discourage lane changes near intersections. Arrows are often used with the white lines to show which turn may be made from the lane.

If you are in a lane marked with a curved arrow and the word ONLY, you must turn in the direction of the arrow. If your lane is marked with both a curved and straight arrow, you may either turn or go straight.

Some highways have reversible traffic lanes to help handle rush-hour traffic. The direction of traffic is normally reversed at set times each day. These pavement markings are used along with special lane signals and other signs and symbols.

A solid white line marks the edge of the pavement on most roads. Stop lines, crosswalks and parking spaces are also marked by white lines. Symbols such as arrows are in white also. A single yellow line marks the left edge of all divided or one-way roadways. Curbs are often marked yellow in no parking zones near fire hydrants or intersections. It is unlawful to park in or drive through areas that have pavement markings indicating fire lanes or safety zones.

The lane marking arrow, in the center lane in the diagram below, indicates that traffic in this lane can be reversed in accordance with local traffic controls due to “rush hour” traffic or other special traffic conditions.

Drivers from either direction may use the center lane for left turns.

Two-way roadway with a center lane for left turns in either direction of travel. The specially marked center turn lane is intended for slowing down and for sheltering turning vehicles and may not be used for passing. 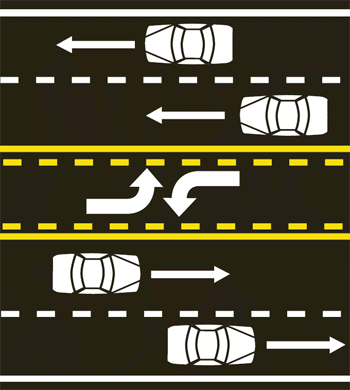 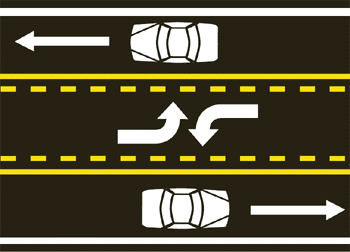 Back to Florida Drivers Handbook Table of Contents